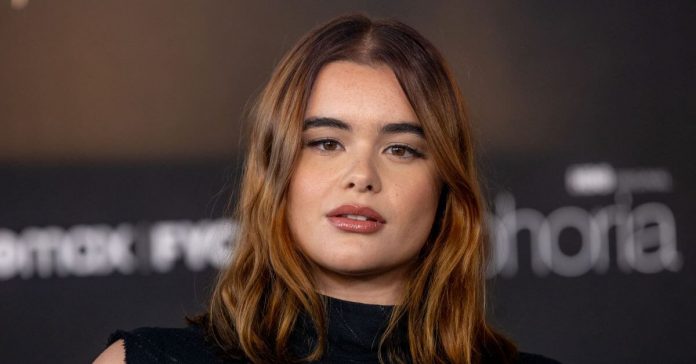 Barbara Linhares Ferreira is a 25-year-old young American actress and model who rose to prominence after playing one of the main roles in the HBO series Euphoria. However, she was active before that in the fashion industry and appeared on the cover page of many magazines. The rising star has a great future ahead with such beautiful acting skills.

Barbara Ferreira was born on December 14, 1996, in Queens, New York City but later moved to Maywood, New Jersey. She is of Brazilian descent from the maternal side. She was raised by women in her life- her aunt, mother, and maternal grandmother. Her mother, Jana Seppe, and grandmother were chefs by profession.

She confessed that she was insecure about her body and weight in her childhood but later accepted the way she is. She completed her schooling at Hackensack High School. She graduated from college. While studying in high school, she became interested in acting and participated in various dramas.

Barbie Ferreira began modeling as a teen. She started working hard for her career by sending pictures to American Apparel. She used to work in their retail stores while side by side modeling for the brand. She has worked for big brands- Aerie, Adidas, Asos, Forever 21, H&M, Missguided, and Target, which gradually added to her fame.

In 2016, Barbie’s unedited photos and interviews from her Aerie campaign went viral on social media. The plus-sized model grew her career with her extravagant statements and behavior. Her body-positive lifestyle and opposition to fat-shaming gained her millions of followers on Instagram, which boosted her renown.

In 2016, she was listed among the 30 most influential teens by Time Magazine. Barbie debuted in acting by starring in the 10-episode Vice series “How to Behave.” The show focussed on etiquette and explored daily life themes such as money, body image, and sex. Later she was also cast in a web series for Teen Vogue called “Body Party” about body positivity.

In 2018, she performed in two episodes of HBO’s Divorce series. In 2019, she got an opportunity to play Kat Hernandez in Euphoria, which turned out to be the best decision for her career. She was also cast in the film Unpregnant in 2020 and made a guest appearance in Jordan Peele’s Nope in 2022.

For future work, she will be playing Kat in Euphoria, starring Zendaya.

According to sources, the estimated net worth of the young actress is $5 million. This is just the start of her career, and she will become the top leading actress in the future. The monthly income of the cute actress is between $30,000 to $50,000 and yearly earns approximately $500,000.

Barbie Ferreira is earning through various platforms such as her Instagram account, youtube channel, acting, and modeling. The endorsements are also part of her primary income and are endorsing various brands like Lane Bryant, Mango, Beth Ditto, Target, and Echkhaus Latta.

She has become the brand ambassador for Yves Saint Laurent Beauty recently. And her signatory with the modeling company Wilhelmina models has helped her to collect a good net worth. Her net worth will only increase in the future as she is in her starting days right now.

Barbie Ferreira is queer and is in a relationship with her girlfriend, Elle Puckett, a musician.

The couple first met in 2019 and have been growing stronger every day.

The Euphoria actress is a very private person and prefers to keep her matters to herself. She is an animal lover and lives with her pet cats in Los Angeles, California. She has citizenship in Brazil and America. She has a Youtube channel where she posts makeup videos.

At the 2021 MET Gala, she wore a beautiful pearl-encrusted gown by Jonathan Simkhai. Jennifer Lawrence is her favorite actress, and Rihanna is her style icon. She is not a big fan of expensive clothes and prefers to wear cheap and comfortable clothes as clothes quickly become old in her view.

Ferreira is 5 feet and 8 inches tall with around 98 kg of weight.

Throughout her newest career, Ferreira has won an award in her life for “How to Behave.” The award was Webby Awards for Best Web Personality.

The plus-sized model has inspired so many people by fighting fat-shaming. Her Instagram is not only a space for her photos, but she also posts motivational and positive quotes about fitness.