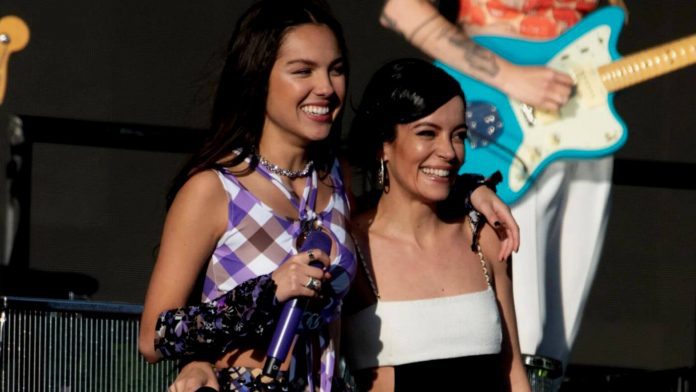 Lily Allen has given a hint that she is not going to retire from the music “just yet” after performing alongside Olivia Rodrigo at Glastonbury 2022.

During the set of Rodrigo at Worthy Farm over the weekend, she brought out the “It’s Not Me, iI’s You’ singer to perform “Fuck You”, a rendition dedicated to 5 members of the United States Supreme Court who voted on 24th June, Friday to overturn the Roe vs. Wade ruling, which gave an assurance women the United States the right to terminate a pregnancy.

What Did Rodrigo Say To The Crowd?

The famous American singer Rodrigo told the people who were present at Glastonbury 2022 that she was devastated and terrified and so many women and so many girls were going to die because of this. She also said that she wanted to dedicate this song to the 5 members of the Supreme Court who showed women that at the end of the day they truly did not give a shit about freedom.

The 19-year-old “Drivers License “ singer further said the song “Fuck You” went out to the justice, Samuel Alito, Clarence Thomas, Amy Coney Barret, Neil Gorsuch, and Brett Kavanaugh “we hate you.” Then they started singing the hit “Fuck You” which was covered by Allen.

Some pictures of the set Allen took to Instagram and wrote “Quite most”, things are truly messed up but at least her babies got to see their mom play and slay Glastonbury with their favorite pop star and her babies were very proud and so was she.

See also  Instead Of Attending Dwayne's Funeral On Friday, The Haskins Family Will Conduct A Memorial Ceremony

She was not sure whether she would be able to get up on the stage like that sober again if she is honest, a part of her thought it was all in the past. She further said that she had the most amazing day. She is thankful to Olivia Rodrigo, “you smashed your first Glastonbury “.

After that, she started discussing her future in the music industry. Allen said that she might be not hanging up her music “just yet.”

What Did NME Say As A Review Of Rodrigo’s Set At Glastonbury?

As a review of the Glastonbury set of Olivia Rodrigo, NME posted that bringing out the singer of ‘The Fear’, ‘Not Fair’ to perform 2009 earworm ‘Fuck You’, the ‘Deja Vu singer Rodrigo dedicated the track to members of the Supreme Court who are responsible for overturning Roe vs. Wade, thereafter name-checking members who have shown women that at the end of the day they did not give a shit about freedom as Lily Allen encouraged the audience to raise their middle fingers.

The ‘Fuck You’ singer last released her album in 2018 with ‘No Shame’ since then Allen has marked 2 years of sobriety and made the singer Wst End debut in the supernatural thriller 2:22. Allen got married to Stranger Things star David Harbour on 7th September 2020 in Las Vegas. She confirmed the news through her Instagram post where she shared some pictures of their marriage.