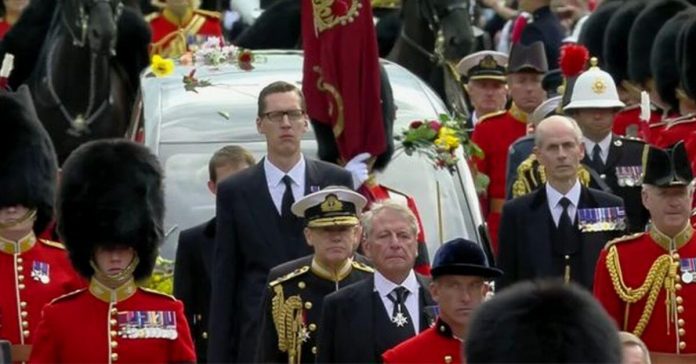 The world in general and Britain in special woke up to a piece of tragic news on September 8th. A death, one of reverberating nature has happened. Yes, the London Bridge has fallen. Queen Elizabeth II, Britain’s longest reigning monarch has secretly passed away at Balmoral Castle. Queen, who was under medical supervision in Scotland, was assumed to be recovering by the doctors.

But even despite the doctor’s goodwill, her death was confirmed that evening at 18:30 BST, setting in motion Operation London Bridge and, because she died in Scotland, Operation Unicorn. A colossal loss to put it short.

Matthew Magee, The Tall Man At The Funeral Of The Queen!

The initial reactions saw the world mourning for the Royal Family. While some others, completely uninterested in her royal stature, opted to glance back at the not-so-interesting history of the empire that she was once the head of. However, as serving justice to both these reactions requires a lot of history to be unearthed, let’s put an end to those by highlighting their equal rights in doing so.

Queen Elizabeth II’s reign of 70 years and 214 days is the longest of any British monarch, the longest recorded of any female head of state in history. Hence, making the departure even bigger – at least for a billion or more. Finally, after the eventual brouhaha which lasted for above a week.

In the King George VI memorial chapel at Windsor Castle, Queen Elizabeth II’s body was laid to rest beside that of her husband on Monday. As one can expect, the death of a royal family member, a head of the state in this case wouldn’t look like a normal Sunday morning. The Royal Mourning indeed will accompany its grandeur and pomp.

Even if the private death ceremony was privately attended by the family alone outside the grasp of the cameras, 2,000 guests including heads of state gathered in Westminster Abbey to file past to pay their respects. The public too was offered a fair share of paying respect to their queen as thousands of them occupied both sides of the road while the monarch was taken on a 25-mile journey from Westminster Hall.

Before the journey on foot to the historic location began, King Charles III stood with his siblings, Princess Royal, Duke of York, and Earl of Wessex, behind the State Gun Carriage of the Royal Navy. The Prince of Wales, Duke of Sussex, and Peter Phillips all followed behind the coffin for the short walk to the Abbey.

As they followed the coffin into the Abbey for the funeral service, their partners and Prince George and Princess Charlotte joined them. As the emotional family left the Abbey, the Monarch’s hearse was accompanied by people she had known so long. Dozens of members of staff including the Palace employees, her royal servants, drawn from the military to the organizer of her diary, and soldiers from the Queen’s Company, 1st Battalion Grenadier Guards – soldiers she personally commanded, etc.

And that’s where it happened, while there were a huge amount of people who weren’t embracing the reverential silence that the Queen’s funeral or any funeral in particular demands. Some, unfortunately, were interested in the quirkier side of the Funeral. That’s when they were surprised by an exceptionally taller man standing in the funeral procession, ahead of the Queen’s hearse.

Both the mourners and non-mourners alike were equally amused by this Brobdingnagian figure, standing tall above everyone present in the queue- a ‘towering’ figure to be precise. Easily spotted and much easily stunned, the royal watchers took this amusement to social media without any further due, resulting in a Twitter frenzy.

Experts jumped in revealing the surprisingly tall guy as Matthew Magee, the Northern Irishman who was the former Assistant private secretary to the Queen. Magee, who is 7 ft. 2 in., is way taller than the ‘Tall Paul’ Whybrew, 6ft 4 in, who worked for the Queen for more than 40 years as her loyal right-hand man.

Matthew Magee got so much better off Paul Whybrew that some even went on to say that he made the Tall Paul ‘titch’. Stunned by his height, Magee too was often mistaken for a royal protection officer. The aide, who is a well-appreciated royal staff, worked for the monarch for four years joining the Queen’s team after Samantha Cohen left as assistant private secretary in 2018.

Magee, who was previously the Duke of Kent Prince Edward private secretary, was reportedly picked to work for Her Majesty because he has a ‘brilliant brain’ and is a ‘smashing guy with a great sense of humor. Matthew eventually found a job at Buckingham Palace thanks to his charm and personality.

Finally, the world has learned that no matter how respectable and desirable an event should be, there will always be people who look out for the funny or quirkier side of it. As rights and freedom are ever present, no one can stop such reactions and no one should. Now that the Queen is gone, the world would be curious to know how well King Charles would lead the succession.

The same can be applied to Matthew after his recent reinvigoration, as many including the media are genuinely interested to know where he’s heading next. Additional to his previous stature and royal fondness, now more than ever, the big guy has the public’s love. Thanks to his genes.