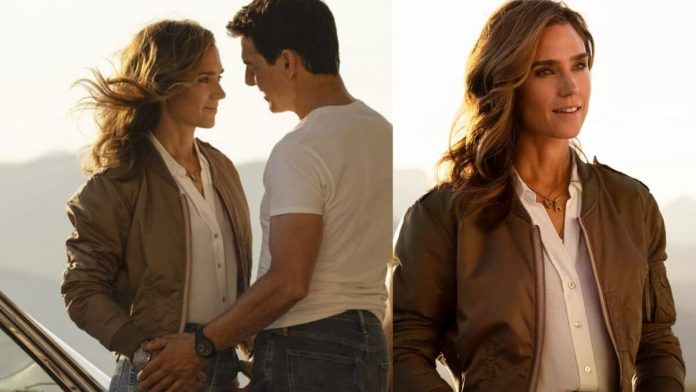 Top Gun: Maverick introduces Penny Benjamin as an owner as well as a bartender at the bar popular with the movie Top Gun and other military personnel. We all understood that Maverick and she have known each other for so long. She portrayed the role of a single teenager named Amelia.

The movie shows confidence of Penny about the character Maverick and the love interest of Maverick. Penny is an honest woman to him with his connection with Rooster.

Rooster is the son of Goose. Goose was the old pilot of Maverick. While teaching the hotshot things about adrenaline-fuelled water sports (we are discussing sailing, Maverick is a Navy as we know that). This scene builds the two of them recalling their past relationship.

Who Is Playing The Role Of Penny?

Jennifer Connelly portrayed the role of Benjamin. Jennifer is an American actress who began her career as a child model. She first made her acting debut in 1984 with Once Upon a Time in America.

Jennifer Connelly is presently 51 years old. Connelly was born on 12th December in Cairo, New York. She is the daughter of Gerard Karl Connelly and Ilene. Connelly went to Saint Ann’s School.

After that, she studied English literature at Yale University in 1988. Jennifer Connelly has described herself as a conscientious student.

When her age was just 10, she was suggested to give an audition as a model. Her picture was sent to the Ford Modelling Agency. The model revealed in an interview that after becoming a model, she did not think about acting.

Her pictures were shown on the covers of many issues of Seventeen magazine from 1986 to 1988. In late 1986, the actress recorded 2 pop songs for the Japanese market. The name of the songs is Monologue of Love and Message of Love.

Jennifer Connelly started acting in a supporting role. She first acted in a lead role in the Phenomena film in 1985. She started gaining attention after the 1986 fantasy Labyrinth with David Bowie.

What Is The Story Of Penny And Maverick?

Scenes made clear early on in Top Gun: Maverick that there is a story between Penny and Maverick. Although, this is the first time that the viewers are seeing Penny Benjamin in the flesh. The reference to this movie has come from the original Top Gun film which was released in 1986.

In the beginning part of Top Gun when the officer is chewing out Maverick and Goose. He chastises Maverick for his past story of high-speed passes not only for air control towers but for the daughter of an admiral.

For this reason, Goose leans over to Maverick. At the same time, he whispers the name ‘Penny Benjamin’ into his ear. Penny’s brought up again by the wife of Goose named Meg Ryan. Goose’s wife wanted Goose to tell her about the time when Goose went ballistic with Penny Benjamin.

The movie shows the off-and-on relationship between Maverick and Penny. When the pair meet again in the movie, despite the immediate connection Penny firmly tells them that they are not going down that way again. When Penny and Maverick inevitably do, Amelia strictly tells Maverick not to break the heart of the mother.

The casts Of Top Gun

Must Read:- Who Is Jim Rash?, Early Life, Career, And Salary! Is He Gay?