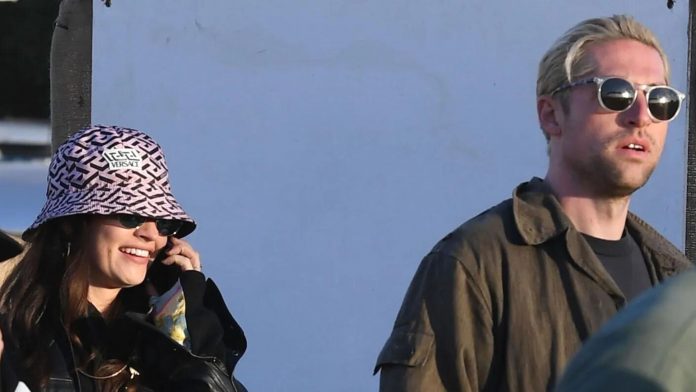 Lily James has enjoyed another day with her beloved boyfriend named Michael Shuman at Glastonbury Festival 2022. Lily looked stunning as she wore a bucket hat, an oversized black jacket, and sunglasses.

She was seen with her boyfriend Michael Shuman who wore a t-shirt under a brown coat and sunglasses. The pair looked very happy. The festival was organized on the 25th of June, Saturday in Glastonbury festival, England.

Lily James is an English actress who has made her relationship with Michael Shuman, she officially confirmed her relationship through her Instagram account. The pair were spotted getting cozy and kissing in early 2021 in England where Queens of the Stone Age rocker was shooting for her 4th coming film What’s Love Got to Do With It?

In April of 2021, Lily and Michael were spotted holding hands with each other in Los Angeles. According to the report, the English actress flew down from the UK to meet the parents of Shuman – Ira Shuman who is a former executive production manager for Walt Disney. He has worked on films including Janet Shuman, the wedding singer, and Strange Days. After 4 months, the duo was photographed grabbing a smoothie.

The real name of Lily James is Lily Chloe Ninette Thomson who is 33 years old now. She became famous after the 2010 BBC production of Richmal Crompton’s Just William, Diary of a Call Girl. She played Taylor at the Young Vic Theatre in 2011.

Then the actress played the role of Katrina in the” play house”, as well as played Cinderella in Kenneth Branagh’s 2015 live-action Disney film Cinderella. Another talent of James is she can sing songs very well as her singing debuts are ‘Sing Sweet Nightingale’, ‘Lavender’s Blue’, ‘And Dream Is a Wish Your Heart Makes’ from the animated film of 1950 in the end credits.

In 2016, James has played the role of Natasha Rostova in BBC historical drama series War & Peace. She received various awards and accolades including Satellite Awards, Teen Choice Awards, and Screen Actors Guild for her talent in the Hollywood industry.

Previously, the actress was in a relationship with Matt Smith, an actor. They started dating in 2014 and they got separated in 2019.

The actual name of Michael Shuman is Michael Jay Shuman whose age is 36. He is an American singer and songwriter. Shuman started getting his fame after playing bass with a rock band named Queens of the Stone Age. This singer has completed his graduation from Loyola Marymount University in Los Angeles.

After joining the band, the band released their 1st album Like Clockwork. Shuman gave vocals and played bass, twelve-string guitar, guitar, percussion, and Mellotron on the album. The album was successfully achieved number one on the Billboard 200. The album was nominated 3 times for Grammy Awards. He gave a contribution to the soundtrack of the video game Grand Theft Auto in 2013.