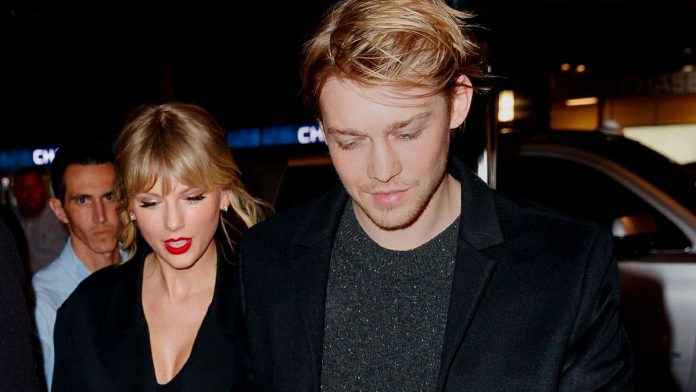 From “We are never ever getting back together” to “Last kiss”, Taylor Swift is famous for writing songs about her ex-lovers. But now, we think this will end soon because Tay has found her Romeo in the real-life love story.

Joe Alwyn is Swift’s fiance with whom she is ready to walk together in her life journey. The couple has kept their relationship private since they started dating, but we have all the information you want to know about Joe Alwyn.

Who Is Joe Alwyn?

He completed his schooling at a local school and attended the National Youth Theatre as he was interested in acting as a teenager. He also studied at the University of Bristol and graduated with BA degrees in English literature and Drama, and acting in 2012.

The blue-eyed actor’s father is a filmmaker Richard Alwyn and his mother Elizabeth Alwyn is a Psychotherapist. He has two siblings, namely Patrick Alwyn and Thomas Alwyn. His great grandfather, William Alwyn, was also a famous man.

He has never been married and is currently in a relationship with famous singer and songwriter- Taylor Swift.

What Films And Series Have He Done?

The 31-year-old actor debuted in 2016 with the lead role in the war drama- Billy Lynn’s Long Halftime Walk. After that, he was seen in The sense of an ending in 2017, Operation Finale, and The Favourite, Boy Erased, Mary Queen of Scots in 2018. He was screened in Harriet in 2019, The Souvenir Part II and The Last Letter from Your Lover in 2021.

See also  How Much Is Whitney Alford's Net Worth? Are Kendrick And Whitney Together?

Recently, he landed a lead role in Conversations with friends which premiered in May 2022. He was also in the limelight lately because of his relationship with Taylor Swift.

When Did The Famous Couple Start Dating?

Joe and Tay had kept their relationship a secret for the past six years. Yes, the couple secretly began dating in 2016, but the “Evermore” artist revealed the relationship in January 2017 through a diary entry, which was released in a Target deluxe version of her album Lover.

The fans have assumed that the couple met at the 2016 Met Gala by interpreting the lyrics of the song “Dress” from Taylor Swift’s 2017 album Reputation. The lyrics are: “Flashback to when you met me, your buzzed cut and my hair bleached.” The American singer had bleached hair, while the British actor was in a buzzed haircut at the Met Gala.

After six years of secretly dating each other, the couple is reported to be engaged in 2022 during the New Year trip to Cornwall. They have not announced it officially but spread the good news between their close friends and family.

What is Joseph Alwyn’s net worth?

The actor Joe, to his fans, has earned $4 Million from his movies, as per Celebrity Net Worth. This fortune is hard-earned from his roles in some massive movies, such as the Oscar-winning film –The Favourite.