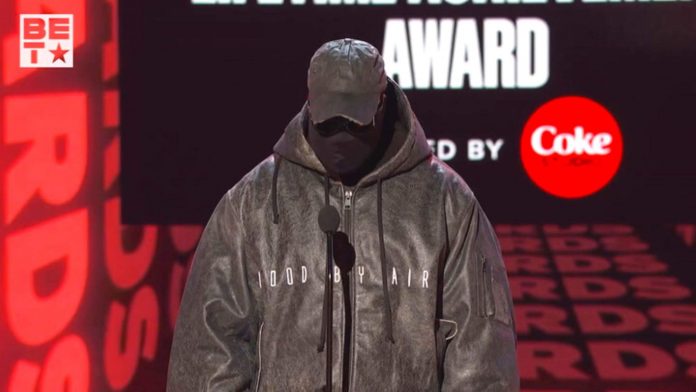 Kanye West, also known as Ye, makes a surprise appearance at the BET awards in 2022. Kanye was well-hidden and difficult to spot.

He was there to celebrate Diddy during the awards ceremony. All of Kanye West’s facial features were fully obscured by the hooded jacket and the gloves on his hands.

Despite the fact that Ye appeared to be someone entirely different from who he really is, the BET Awards audience greeted him with a thunderous ovation.

The Microsoft Theater in Los Angeles hosted the awards ceremony on Sunday night. The lively performance of Taraji P Henson, who hosted the event, made it a success.

With the Bollywood stars, Sunday night was a sight to behold. Diddy, the hip-hop entrepreneur who earned a lifetime achievement award, had a particularly memorable night at the awards ceremony.

Taraji paid tribute to Diddy’s effect on the culture in the late 1990s, when his record label, Bad Boy Records, was at its peak.

It was another Kanye-themed surprise for Diddy, who is now 52 years old. Kanye surprised everyone when he showed up to present Diddy with the trophy he truly deserves. If Kanye didn’t provide some of the highlights, the crowd wouldn’t believe it was him.

The audience was taken aback at first by Ye’s appearance on stage in a black suit. It was confirmed as Kanye later when he began speaking and making the movements that are characteristic of him.

The rapper wore a black sunglass over the black mask he used to cover his face. In his overall dark attire, with a rusty cap on his head, he appeared a little out there.

Kanye West appeared to be overjoyed to pay tribute to Diddy. Ye addressed Diddy before embracing him, saying a few things about him and describing him as a brother. Both had a great time on stage together.

Because of his friendship with Diddy, Kanye was overjoyed at the prospect of crowning the king. According to Kanye, Diddy is a constant source of inspiration for him and he often seeks his guidance in various situations.

He joked about his ex-wife Kim Kardashian during his speech. Kim Kardashian was the target of a joke that Kanye couldn’t help but make behind her back.

When Kanye arrived at the award ceremony, he was met on stage by the iconic music producer Babyface. While Kanye’s address was lengthy, he did a good job of entertaining the crowd.

It was also mentioned that Ye enjoys listening to Diddy’s mixtapes in his mother’s residence. That Diddy is his favorite artist wasn’t lost on him.

Kim and Ye attended Diddy’s 50th birthday party in 2019 together, but their relationship quickly deteriorated. It was filed in February 2021, and they were officially divorced in March of that year.